As together we navigate the unprecedented challenges presented by the COVID-19 pandemic, we wanted to take a moment to assure you LightBridge remains committed to our mission to care for you in the comfort and safety of your own home, wherever that may be.

Our leadership team is meeting daily to make sure we remain current and meticulously follow all state, federal and agency guidance, and regulations as they relate to the protection, evaluation, treatment, and containment of this virus. Our employees receive real-time updates of all new verified information. They are trained to screen themselves and their patients/families before every in-person visit according to the most current CDC guidelines and take actions required to comply with all precautions and/or restrictions to mitigate the spread of infection. You have likely already experienced some of those measures.

We also want to make sure we are providing the most current information and guidance available to us to help you care for and protect yourself and your loved ones. Advice from our Medical Director, Dr. Emmet Lee:

“… the best way to protect yourselves is still avoidance of people with signs of illness and handwashing with soap and warm water for at least 20 seconds or using a 70% alcohol-based hand sanitizer … we also recommend that you keep the number of visitors limited and even consider discouraging visitors from coming.  Certainly, anyone with cold-like symptoms should not be visiting.”

As you know, this continues to be an evolving battle, but we want to assure you we are here for you! Please never hesitate to reach out to your RN Case Manager or other members of your care team if you have any questions or concerns. Some of our patients reside in facilities where our onsite access may have been limited so it becomes even more important to remember we are never more than a phone call away (24 hours/day, 7 days/week).

In addition, we are grateful for the decision at the federal level to allow more “virtual” visits. LightBridge has already been providing telehealth visits, as allowed, but in light of the federal decision to expand access and allow us to more easily make those available, we are actively increasing our capacity to do so. If you would be open to allowing televisits and wish to pursue (or at least learn more about) that benefit, please talk to your RN Case Manager.

We hope this update has been helpful. More than anything, we simply wanted to reaffirm our unwavering commitment to your comfort, safety, and peace of mind. We remain dedicated to that mission and hope you will feel free to contact us with any questions or concerns you might have.

Honoring Those Who Served 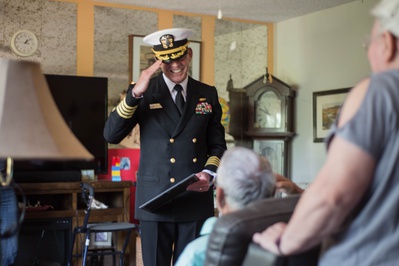 One such program is the” We Honor Veterans Ceremony” which thanks veterans in hospice and/or palliative care for their military service. Of note is that LightBridge Hospice and Palliative Care years ago achieved the prestigious Level IV Partner status in the nationally acclaimed We Honor Veterans program and was one of the initial hospices in the nation to earn this designation.

Underwritten by donors to the LightBridge Hospice Community Foundation, the “We Honor Veterans Ceremony “is many times the only formal thanks that many veterans (now in their later years) receive for their service to our country, particularly during the Vietnam era.

For a We Honor Veterans Ceremony, Foundation volunteers from the military wear their dress uniforms and carry a service-specific pillow on which rests a pin for the patient. Additionally, there is a certificate of appreciation. The family is invited to the ceremony and often, the patient will rally for the presentation which is accompanied by a cake and music for the family members and guests.

With the challenges presented during this pandemic, families are even more focused to make sure their loved ones are well cared for and not alone in their final hours.

Let us introduce Wilbur Hawk, an Air Force veteran and father of 10 children from three marriages. During his active duty years, he was a radar technician working on F-14 jet engines and other aircraft including the Stealth bomber. Once out of the military, Wilbur worked as an electronics engineer helping companies such as IBM and GE in the ’60s and ’70s. When his father fell ill, he moved from San Diego to New York to take care of him, and eventually Wilbur moved back to San Diego.

Wilbur never gave up on reconnecting with children from his previous two marriages. Through social media and a story posted on Facebook, written by his son, Will Hawk III, Wilbur amazingly located three daughters from an earlier marriage after searching for them for 51 years.

His San Diego-based son, Will III, and Wilbur’s daughter- in- law, Jessica, told of his incredible love for his family and his constant assurance that each of his children was loved and special to him in their own unique ways. They, along with two other sons who live in San Diego County, lovingly took care of Wilbur in Will and Jessica’s home during the final weeks of his illness.

LightBridge Hospice came into this family’s circle through the company Will and Jessica started in 2012, Love Right Care (loverightcare.com). Through the work they do with their clients, the Hawks were introduced to LightBridge Hospice and knew of the high level of care the patients received when they were referred to Lightbridge for hospice or palliative services. Thus, at the end of Wilbur’s life, they turned to LightBridge for hospice services in their home.

When Will mentioned to the LightBridge social worker that he was looking for his father’s DD-214, the official discharge document that all veterans receive, the social worker mentioned the Honor Ceremony. She asked if the family would like to do this for their father. The family wholeheartedly endorsed the idea.

In early May of 2020, Wilbur’s condition rapidly declined, making it imperative that as many of his children as possible gather to see him and attend this wonderful ceremony for him. The local children pulled the family together from all over the country to be present for the special event for their father. From New York, Kansas, and Arizona, despite pandemic challenges, they arranged last minute flights to San Diego in less than a day

Amazingly, two of his three daughters and six of his sons were present in time for the event.

On the day of the Honor Ceremony, Wilbur was semi-comatose. For the ceremony, the LightBridge Hospice Community Foundation volunteer in the person of Navy Captain Wil Gorrie marched in wearing his dress blues, smartly clicked his heels and saluted at Wilbur’s bedside. As this generous, gracious Navy Captain volunteered his time to honor this veteran, amazingly, Wilbur’s eyes popped open. The Air Force veteran rallied and was able to respond to the Captain’s questions about his military service.

Wilbur was presented with a certificate of appreciation and a pin thanking him for his service. Surrounded, by his family, he took two bites of one of the celebratory cupcakes LightBridge provided, his last sustenance.

Having most of his family present, being honored for his service, and knowing his family felt loved and treasured, Wilbur died the following day. He would have been 81 on May 11.

When a memorial ceremony can be held for him at Miramar National Cemetery, the children will once again gather from many locales to honor their father.

When asked how he would want his father to be remembered, Will III said, “That he was an amazing man who loved his family, no matter the distance between him and his children-he loved every one of us equally.”

A wonderful legacy of love and service from a man whose family went to great efforts and expense to bring his children together for a final hug and tribute.